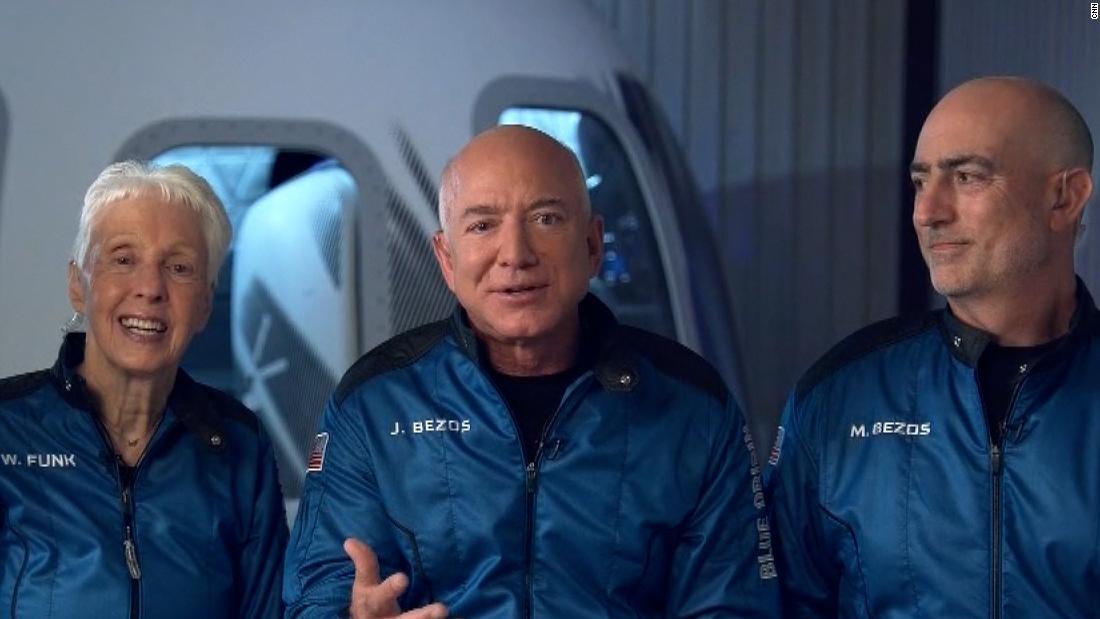 (Notice) The billionaire space race has only just begun

By Mary J. Jimenez Last updated Jul 20, 2021
0
Share
Bezos is of course not the first billionaire to take such a trip. On July 1, a spacecraft called VSS Unity transported Sir Richard Branson, billionaire and founder of Virgin Galactic, the company that made the space capsule, into space. (Technically, there is a dispute as to whether Branson reached space. The accepted international boundary from space is called the Kármán Line, and it’s an elevation of 100 km or about 62 miles. 50 miles Branson reached 85 km, or about 53 miles.
Why do we care so much about billionaires who take space travel? After all, people have been heading to space for 60 years since Yuri Gagarin made the first trip. Unlike Branson and the future Bezos, he actually circled the Earth for almost two hours at a maximum altitude of 203 miles (327 km). And, of course, over the past 60 years, there have been many successful manned missions in space carried out by countries such as the United States, the Soviet Union (now Russia), and China.
The interest comes from the fact that what one might call commercial space exploration, or “space tourism”, seems to be coming of age. What was once reserved for the very few is now like a ride in Disney Park for the super-rich.
Branson’s space company plans to eventually launch about 400 space flights per year, with each individual’s ticket price exceeding $ 250,000. Blue Origin’s business plan has not been made public, but early reports suggest it will also charge around $ 200,000 for its suborbital flights. Blue Origin also has a plan for lunar flights and other options, but it takes a slow but safe approach.
Then, of course, there’s Elon Musk, who hasn’t announced plans to be a passenger in his own spacecraft, but has reportedly posted a bond for future Virgin Galactic travel. Musk is also a billionaire, who got his start at a company that eventually became PayPal. He has since invested in or been a leader in many industries, including with automaker Tesla, growing his fortune. In 2002, he founded SpaceX, an aeronautics company with an ambitious program designed for commercial space flights.
SpaceX is far ahead of Virgin Galactic and Blue Origin in terms of orbital flight. The company has received contracts from NASA to resupply the International Space Station since 2012 and has brought crews to the station since 2020.

Of course, this begs the question: what is the value of commercializing spaceflight, including such ambitious projects as establishing a manned base on the Moon or Mars? Personally, I have publicly questioned the viability of such missions at a reasonable cost. While no one can dispute how captivating such targets can be to the public, a manned mission to Mars is prohibitively expensive, and I never see Mars colonized. If we want to find places to live, we could “colonize” remote areas of Canada and Siberia for much less.

But for other tasks, commercial space flight is very attractive. NASA is developing a heavy transport vehicle called the Space Launch System, which NASA administrator Jim Bridenstine guessed that each launch will cost $ 800 million per rocket for a bulk order and $ 1.6 billion if the NASA only buys one. In contrast, SpaceX’s heavy transport vehicle called the Starship is much cheaper. Musk cited a price of as little as $ 2 million per launch, although David Todd, an analyst at Seradata, estimates the cost to be a little higher at $ 10 million.

Either way, the greatly reduced cost of using SpaceX to launch objects into space is obviously appealing. This means that scientists can spend more on the scientific instrumentation of their satellites. And, as a scientist who is passionate about what NASA has done over the years, I can’t help but notice that a lower launch cost could lead to many more interesting science missions.

It would take a bit of engineering for Musk’s new rocket called “Starship” to launch astronomical observatories like the Hubble Space Telescope or the James Webb Space Telescope, but it’s certainly possible that it could launch either or the other. The Hubble is the world’s flagship astronomical observatory, and the Webb is its nominal replacement.
But Starship is a very powerful launcher, surpassing the thrust of the Saturn 5 rockets that sent men to the moon. The spacecraft can lift over 100 metric tons in low earth orbit (LEO). In contrast, the Space Shuttle (which carried the Hubble Telescope in the air) could only lift 29 metric tons in the same orbit. SpaceX clearly has the ability to lift satellites and telescopes into space.
And SpaceX’s previous platform, called Falcon 9, has already proven its worth. For example, the Transit Exploration Survey Satellite, a mission to find planets around other stars, was launched using the SpaceX Falcon rocket, as was the Jason-3 satellite, which is an orbital surveillance platform. of the climate. And it is planned in 2022 to use the SpaceX rocket to launch the Psyche mission – a probe to study a metallic asteroid. All of these launches would have been more expensive with NASA rockets.

The bottom line is that commercializing space will reduce launch costs, and this has benefits for anyone who needs to lift an object above Earth’s atmosphere. My interest is to launch satellites carrying telescopes that can study the cosmos and those that can monitor the well-being of our planet. I’m not as interested in Disney rides on steroids – maybe because I’ll never be able to afford such a trip – but if these launches generate revenue for companies to design better, more economical rockets, I am. quite for him.

It is evident that commercial spaceflight has benefits for a wide range of customers and the three existing companies will be competing for revenue. It helps us all, maybe because one business is more efficient than others. And there is always the possibility that another company will pick up the baton and win the race for commercial space.